Cryptocurrency fans are poised to get their first over-the-counter Bitcoin ETF as Winklevoss twins push for approval of Winklevoss Bitcoin Trust by the end of this financial year.  The twins, Cameron and Tyler, have already settled on Nasdaq Exchange as their preferred destination and but they are yet to unveil the ETF’s ticker symbol.

The Winklevoss twins, better known for their legal battle with Facebook Inc.’s (Nasdaq: FB) founder Mark Zuckerberg, filed for approval of their Bitcoin exchange-traded fund in 2013 July. However, their fund now seeks to enable persons who own brokerage accounts to invest in Bitcoin with less worry about the safety of their coins, and it is heading towards regulatory approval.

ETF, an abbreviation for exchange-traded fund, is an investment fund that is traded on stock exchange, just like stocks.  They are not far from index funds, save for the fact that ETFs are traded throughout the day. Nevertheless, they hold assets for instance stocks, bonds, and commodities such as now bitcoin. They often have very low management fees.

The Winklevoss brothers are among the most influential youthful of investors. Last year April, they claimed to own at least 1% of the total Bitcoin in circulation, and later on in July they backed this claim by filing a Bitcoin ETF proposal with the Securities and Exchange Commission (SEC).  Through their company Math-Based Asset Services, they filed a Form S-1 Registration Statement seeking to create the Winklevoss Bitcoin Trust, a Bitcoin ETF.

The Winklevoss duo both studied at Harvard, where they allege Zuckerberg stole their Harvard Social Network idea. They won a lawsuit against the social networking giant and got a settlement of $65 million, of which $20 million was in cash while the rest in 2008 Facebook stocks. The two are also known athletes, having represented U.S. in the Beijing Olympics. They are now venture capitalists after graduating from Oxford University’s business school. 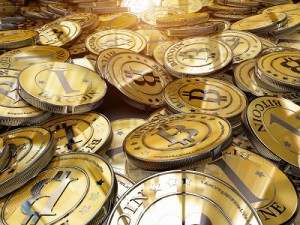 According to the filing made by Math-Based Asset Services, Winlevoss Bitcoin Trust will be easily accessible and cost efficient.  The ETF will allow its investors to buy bitcoins without worrying about storage. In addition the company says that the ETF price will be based on the volume-weighted average price of bitcoin across top exchanges in the world.

Just like stock traders who use ETFs, bitcoin investors will enable investors to diversify risks and implement different investment strategies, for example buying the ETF on margin and shorting it.  Brokerage firms may also provide investors with the buy and sell options.  Hopefully, a Bitcoin ETF will help contain bitcoin’s volatility by giving the world’s largest cryptocurrency exposure to the mainstream investment options. This could help bitcoin become a valid store of value as a currency.

Moneymoney.com has discussed the possible tickers that Cameron and Tyler could use for the first ever traded bitcoin ETF, and it seems the most obvious options are already in use. It would be impossible for them to use TWIN, WINK, BIT, COIN, CRYP or MATH. Nevertheless, the last part of their name, VOSS, is available.

Because this is the first ever traded bitcoin ETF, it would be wise to give it a digital currency themed ticker. Perhaps Winklevoss Bitcoin ETF could use BTCF, which represent the Bitcoin symbol and the addition “F” for Fund. So what is your suggestion about the ticker?