Bitcoin sales account for about $15,000 worth of revenues at Overstock.com, Inc. (NASDAQ:OSTK). This is according to the US online retailer’s CEO Patrick Byrne. He was speaking to Reuters where he also pointed out that the company’s cumulative bitcoin sales have already passed the $2m mark.

Overstock begun accepting bitcoin in January and it seems to be paying off. The retailer reached its first $1 million early March, and by late May, its bitcoin cumulative sales were already $1.6 million.

Byrne expects the monthly bitcoin sales to triple from the current $300,000 to about $1 million.

Overstock is an online retailer publicly traded on the Nasdaq stock exchange that sells excess inventory and closeout merchandise at discounted prices. 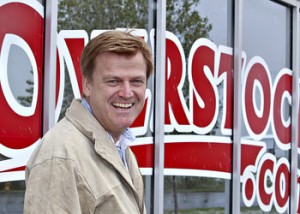 The US online retailer’s bitcoin commitment transcends sales. The company recently announced that it is planning to rollout bonus payments for its employees, but guess which currency the management have in mind? In addition, the company is also considering introducing digital payment option for its regular payroll payments.

Overstock has also offered to promote the digital currency on its network through offering special deals to its vendors who have chosen to accept bitcoin. The offers on the table include favourable terms of payment and discounts. In the bitcoin ecosystem, Overstock has offered to donate 3% of its bitcoin profits to any organization that promote digital currencies.

Does the Commitment Payoff?

This is one question everybody would ask. Why would Overstock be so committed to bitcoin if it doesn’t payoff?

While talking to Business Insider , Byrne said his company has been getting the rewards of being associated with Bitcoin. During different cryptocurrency conferences, he is often approached by digital currency enthusiasts pledging to do their shopping at Overstock as a payback to company’s dedication to the growth of the bitcoin community.

“…It has become part of the bitcoin ethic to go and buy something on Overstock.com,” Byrne told Business Insider.

Overstock has become a global leader among merchants in exploring the opportunity presented by digital currencies. The US retailer has been making appearances in major bitcoin conferences and has often been used as an example in bitcoin’s quest gain mainstream acceptance and to lure in more merchants into accepting virtual currencies.

For example, BitPagos – Argentina’s leading bitcoin merchant processor – has only registered 600 merchants compared to BitPay’s or Coinbase’ over 30,000 merchants. However, among the listed merchants, Avalancha has emulated Overstock and is likely to be the pacesetter in this country where bitcoin is quickly gaining grounds as an alternative store of value. Argentina’s has been described as a prolific area for mass consumer adoption given the poor performance of the country’s currency, Peso.

On 7th August Avalancha partnered with BitPagos, and Latin America-focused bitcoin exchange Bitex.la to accept bitcoin purchases. Avalancha is a newly launched online store for electronics and home appliances, and it is expected to generate about $3 million by the year fall.

While Overstock in average pocket $15,000 from bitcoin sales on a daily basis, conventional sales still account for over 99.75% of its total sales. Nevertheless, we cannot rule out the benefits that accepting digital currency has brought the firm.