In June, Google, through its finance unit, partnered with Coinbase to create BTC-to fiat price conversions that include leading global currencies. This was achieved courtesy of a bitcoin price tracker.

The integrated bitcoin calculator also works on Google Search smartphone app. As explained by the company’s spokesperson, users can now ask Google search app to do the conversion of bitcoins to dollars or dollars to bitcoin and the tool outputs the answer requested. For instance, the result shown in the image below will appear if you search the question: how many dollars are in 500 bitcoins? 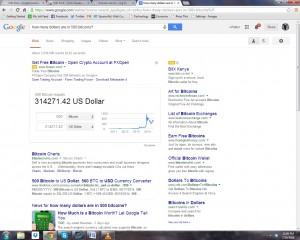 Google enjoys near monopoly in the internet search segment, but it does not want to leave anything to chance. Its decision to integrate bitcoin calculator is considered to be response to the latest developments in this segment.

The Bitcoin Calculator integrated by Google is called to action when queries such as “price of bitcoin” or “bitcoin price” are sent to the database. Search searches instantly access the tool and the search results include the bitcoin calculator itself.

Interestingly, the calculator is also designed to handle more complex queries such as the aforementioned, “y BTC” (where y is a variable) or the “current price of bitcoin”.

The bitcoin calculator displayed in the search results comes along with the currency’s price chat that includes the BTC-price more than three years ago.

Under the calculator, there is a Disclaimer that absolves Google of any responsibility in case the figures shown do not represent the real time value. In fact, the company acknowledges this by saying “…the resulting search may not reflect real-time value.”

Bitcoin is a virtual currency created through a complex process referred to as mining. In the mining process, powerful computers solve complex mathematical problems at a predictable rate.

Bitcoin and other alternative currencies have been lately on the rise. Their backers want to take bitcoin, the leading virtual currency by market capitulation, to the mainstream. Already many companies have embraced it but it yet to get similar response from ruling organs. In fact, most governments have stood against use of such currencies. However, like Gold which is trusted globally as a store of value but it is not regulated by any central authority, bitcoin may replace credit cards as the ultimate internet medium of exchange and internet money.

Google’s bitcoin calculator integration is yet another step in bitcoin’s quest to get mainstream adoption.  The worlds leading virtual currency will hugely benefit from this as there are very many people who still don’t know about the existence of digital currencies. And with the calculator now available in the most powerful and most famous search engine, now more people can learn about bitcoins.